Hellooooo everyone! When I opened up my laptop with the intentions of writing a blog post, I had no idea what I wanted to write about. I had 0 inspiration. Zippo. Nada. Basically, my inspiration levels were the equivalent of the musical quality of “Old Town Road”. That is, none.

Yikes, I just offended at least 10 people by saying that. Maybe even 11. *Insert clip of Demi Lovato singing Sorry Not Sorry here* I just can’t get behind country rap (the abbreviation of which is “crap” so that really doesn’t help). Call me a hater, but I’m just not the Gucci hat and Wrangler booty type of gal.

All of that was to say that I didn’t know what to write. However, I was feeling pretty chatty so I had the genius idea to write down pretty much everything I’ve been doing/thinking lately. Could this post be incredibly lame and possibly annoying? Oh, absolutely. Am I going to write it anyways? Um, do you know me? Of course I’m going to write it anyways! Annoying is my middle name, man. Hannah “Annoying”…..ha, you thought I was going to say my last name on here? I’m not about to get kidnapped.

First things first, I thought I’d share some photos from formal! It was my fifth year attending and this year I got to go with a veryyyy special someone. Stephen was actually at the last two formals but we weren’t “together” together. Our awkward little sophmore and junior selves just couldn’t do it quite yet. That’s doesn’t matter though, we’re here now and that’s what counts. We’re pretty darn cute too, if I do say so myself.

Ignore the frizzy hair…NC humidity is not kind to me. Neither is NC pollen, but that’s a whole other story. Let’s just say I’ve been struggling the past few weeks.

I purchased this dress from ASOS and it fit me PERFECTLY! I couldn’t believe it. I love the cobalt blue color, and also the price. $35 for a formal dress? You can’t beat that. Except, of course, with a $34 formal dress. Or a $33 formal dress….I could go on, but I’ll spare you. This is just a freaking pretty dress for cheap, that’s the only point I was trying to get across.

The only downside to a cheap dress is that the fabric is not going to be quite Gucci worthy. You know those reusable, eco-friendly grocery bags that all the trendy grocery stores try to get you to buy? “Save 000.1% on our groceries when you use this bag!” That’s basically what this dress feels like. It looks great from a distance, but if someone randomly decides to feel your dress (which is extremely weird btw, maybe don’t be friends with that person) then they may comment something along the lines of “did you get this from Aldi?”. Just ignore it and let the words roll off of you like water droplets will roll right off of your skirt.

I was trying to think of exciting stories to tell you about formal and I’m kind of at a loss. It was really fun but there was no WOW moment or something like someone Cupid Shuffling on a table. Homeschoolers just don’t do that. There was a lit conga line, though. Nothing says party like a conga line, right?

The only thing worth mentioning food wise are the quality mashed potatoes. Oh my heart. Nothing gets me quite like a fluffy, flavorful pile of mashed potatoes. The rest of the food was pretty good as well, but nothing can compete with my beloved creamy spuds. Especially not the salad, that was basically grass with ranch on it. No shade to the chefs or anything, just shade towards the people who thought growing edible grass was a good idea. We’re not cows.

Moving on from formal….it can only go downhill after that assessment of the salad. I can’t believe anyone is still reading this to be honest. Y’all are awesome.

Another super exciting thing that’s been going on in my life lately is my merch! It’s not typically what you’d think of as “merch” – that is, it’s not my name plastered across a shirt. I designed it for all of my fellow coffee loving gals! Here’s the link if you want to check them out. Your support would truly mean a lot to me.

There are only four more weeks of school until your girl GRADUATES! I’m so hype for that if you can’t tell. I still have three-ish more years of school left before I get my Bachelors but I’m one step closer to the career I’ve wanted for a long time. I’m currently taking an Education class and it’s reminding me just how much I love to teach and work with kids!

Last thing I wanted to chat about is the whole Lori Loughlin thing. If you’ve been reading my blog for a while you know that I’m absolutely obsessed with the show she is (was) in called When Calls the Heart. It’s the ultimate cheesy/dramatic/romance show. When I found out about the whole scandal, I couldn’t believe that Abigail (or Aunt Becky, can’t leave out the OG) would do something like that. I feel like the drama is dying down a little bit now but I just wanted to throw in my two cents.

Just because you’re rich doesn’t mean you have to abuse your wealth. Period.

Should I say it louder for the people in the back?

JUST BECAUSE YOU’RE RICH DOESN’T MEAN YOU HAVE TO ABUSE YOUR WEALTH.

Forgive me for raising my voice. I just felt that my point should be made known to everyone.

The fact that paying off people when your smarts/talents/abilities can’t get you what you want is so prevalent in our society makes me sick. To think that someone’s view on life is so skewed that they think it’s okay to Photoshop their daughters into photos and pay $500,000 to be “recruited” is honestly insane to those of us from the normal world like myself. I work hard for my grades. I work hard to make the volleyball team each year. If I quit working hard, my grades would instantly drop and my volleyball skills would be non-existent…that’s just how life is. Or, how life should be. Apparently those seemingly obvious rules of life don’t apply to some people in Hollywood.

Last night my parents and I were speculating on how they’re going to edit Lori out of the current season of When Calls the Heart. It’s not going to be seamless, that’s for sure, considering they were in the middle of the season when all of this drama started. She’s the mayor of Hope Valley, for crying out loud. Here’s our theory on how Lori, or “Abigail Stanton” will be written out.

“Does anyone know what happened to Abigail? She disappeared out of nowhere.”

“I heard that she bribed the mountie school to try and get Cody (her son) into it. She even pasted a photo of him onto another photo to make it look like he actually knew how to ride a horse.”

Hallmark, if you use my idea, please credit my Instagram (@makeupandcoffeecups). Gotta get those follower gainz, ya know? 💪

Well, I think that about wraps up this post. If you made it to the end, I love you. I love all of my readers of course, but y’all get a little extra sprinkling of love powder (that sounds so sketch hang on let me rephrase that).

Y’all get an extra dash of love sauce? An extra scoop of love cream? An extra slice of love pie? These just keep getting progressively worse. Someone stop me, please.

For real though, I appreciate your support so much. Thank you for sticking around, even through random rambling posts like these.

I hope everyone has a fabulous weekend!

View all posts by makeupandcoffeecups

Hi there! Welcome to my little corner of the Internet. My name is Hannah and I’m a coffee drinking, makeup loving, 18 year old girl. I’m so glad you decided to check out my blog. Be sure to subscribe so you don’t miss out on a post! 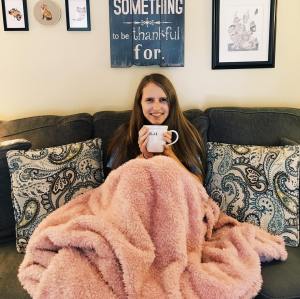 Join 327 other followers
Follow makeup and coffee cups on WordPress.com

What's New on the 'Gram?